Which Renewable Energy is the Best for the Environment? - Blue Raven Solar

Which Renewable Energy is the Best for the Environment?

Which Renewable Energy is the Best for the Environment? With an increase in climate change concerns over the last several decades, many scientists, climate leaders, and community members have sought to develop and institutionalize sources of renewable energy into their society. Renewable energies have two advantages over their non-renewable competitors like oil or coal.

The first benefit is pretty obvious, as it comes from the name, in that “renewable” energy generates power from a source that cannot be depleted. Its second advantage is that renewable energies produce clean energy that do not give off harmful CO2 emissions or other greenhouse gases. As the years go by, older renewable energy methods are improved upon and new sources of renewable energy are introduced.

This global improvement and development have allowed renewable energy to become a more viable method to replace its unclean counterparts, but are all renewable energies efficient? In today’s post, we’ll walk through the disadvantages and advantages of the major renewable sources of energy being used today. Generating power from the wind is one of the oldest forms of renewable energy. It’s been used for thousands of years to move ships across large bodies of water. Eventually, society figured out how to use wind with a windmill to grind grain, pump water, and cut wood.

The first wind turbines to generate electricity were built in the start of the 1900s to bring electricity to rural areas. As electrical grids were built, these turbines lost popularity, but with a rise in climate change concerns, wind turbines have made a huge comeback. Currently, 7.3% of the US’s electricity production comes from wind energy.

American Paleo-Indians used geothermal energy to cook their food over ten thousand years ago. Despite its old history, the development of geothermal sites to produce electricity did not occur in the U.S. until the early/mid 1900s. Geothermal energy uses hot steam and water from vents to spin generators which create electricity. Like other renewable energies, hydroelectric energy has a long history. Water wheels were invented thousands of years ago and have been used by several civilizations around the globe to grind wheat.

Within the last couple centuries, scientists have figured out how to harness the power of moving water to generate electricity. In the early and mid 1900s many hydroelectric dams and power plants were built in hopes of providing large quantities of power to the US. Technological improvements continue to improve hydroelectric energy’s efficiency. Currently it produces about 7% of the United States’ electricity. Humans have harnessed the power of the sun for thousands of years. Initially, solar power was used to produce thermal energy like heat or fire. It wasn’t until the late 1800s that scientists discovered that light from the sun produces electricity when exposed to specific elements like selenium or silicon.

With more research and testing, the world’s first silicon photovoltaic cell was created in 1954 by scientists Daryl Chapin, Calvin Fuller, and Gerald Pearson. Solar technology has greatly improved in efficiency and cost in the last 50 years. Currently, only about 2% of the United States’ electricity production comes from solar power. 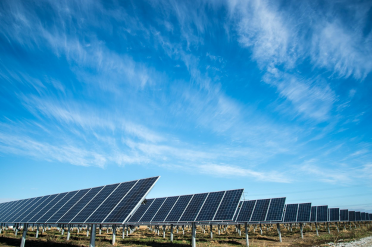 So which Renewable Resource is Best?

Now that we know the advantages and disadvantages of the major global sources of renewable energy, we can determine which is the best. Although they all have beneficial implications for our environment, Blue Raven Solar believes that solar power takes the cake because it is accessible to the consumer market.

Not every homeowner can build a dam in their backyard or set up a massive wind turbine, but most homeowners can purchase and place solar panels on their roof. So, if you’re a fan of the green energy movement, don’t hesitate to look into purchasing solar for your home.

Becoming a Part of the Solar Movement

At Blue Raven, we make going solar as simple as possible. All you have to do is fill out a quick form, schedule an appointment, receive a free customized proposal, and talk with one of our solar specialists about whether or not solar panels make sense for your home and situation.

If you’re ready to become a part of the solar movement today, click on the link below, and we’ll contact you as soon as possible!